Overview of the Marine Park

The Board of Directors of this management body consists of 10 members, who represent national, regional and local authorities, local professional associations and non-governmental environmental organizations. In 2010, Professor Stefanos Paraskevopoulos, University of Thessaly, Department of Special Education, was appointed Chairman of the Board.

The efforts to protect this area began in the early 1970s. In 1986, the Prefecture of Magnesia signed the first resolution aiming to the protection of the Mediterranean monk seal (Monachus monachus) and its natural habitat. These efforts were followed by a series of ministerial decisions on the protection of the local nature reserve. In 1992, the area was finally declared a "National Marine Park". In 2007, properly trained scientific and technical staff was hired by the management body of the National Marine Park, registered in Alonissos, for the implementation of protection and research programs, as well as public awareness and sensitization campaigns. A five-year management plan is also in course of preparation.

The National Marine park of Alonissos and Northern Sporades is the nature reserve for a series of terrestrial and marine species living in the Mediterranean Sea, including hundreds of plants and animals, as well as remarkable archaeological and historical monuments.

From both a scientific and a cultural point of view, this is an area of great interest given the archaeological finds (shipwrecks, old monasteries and churches) dating back to the prehistoric era, the classical period or the Byzantine Empire.

Visitors are welcome to enjoy swimming and diving, take pictures, record videos, go sightseeing, walk around or observe the wildlife in areas where public access is permitted.

There are also specific marine areas where fishing is allowed for amateur fishermen. Hunting is allowed only on the island of Gioura, subject to special permission.

The Management Agency of N.M.P.A.N.S

The Management Agency of N.M.P.A.N.S. is responsible for the management of the Marine Park and its daily operation. Effective protection of the Park is a challenge for the Body.
With the guidance and supervision of the Agency’s Governing Council, is implemented the everyday operation by the scientific and technical staff of the Body in collaboration with non-governmental organizations, universities, public authorities, professional organizations and the local community.
Management Agency’s scientific, administrative and guarding staff contributes both to administrative support and various field actions and other activities which are necessary for the effective management of the Park.
The protection of the special characteristics and details of the Park from illegal activities is also achieved with the cooperation of the Port Authorities of Skiathos, Skopelos and Alonissos. The central office of the Management Body is placed in Patitiri in Alonissos. Management Agency’s staff achieves the effective management of the Park through:
• Monitoring, supervision and patrol of the Marine Park
• Informing visitors
• Protection of natural resources
• Research
• Implementation of European programs
For detailed information on the specific regulations that are in effect to N.M.P.A.N.S. the visitor is advised to contact the Management Body of the Marine Park in Patitiri, which is the competent authority for giving permits to enter the Park as well as permissions for activities within the Park. Next to the Management Body’s office there is also the Information Center.
For any clarification, please contact the offices of the Management Body of N.M.P.A.N.S. on the phones 24240 66378–66419 and on the e-mail : info@alonissos-park.gr.

Local population totals 3,000 permanent residents approximately; following a period of internal and external migration, current vital statistics show a small yet stable population growth during the last decades. Agriculture, cattle-raising and fishing are the main sources of income for locals; in recent years, tourism also seems to be growing on the island. The National Marine Park of Alonissos and Northern Sporades is expected to play a significant role in the sustainable development of this region, providing new job opportunities and supporting local traditional professions.

The majority of local population lives in Patitiri village, which is also the central port of the island. Patitiri is the administrative centre of Alonissos and the place where all public services are concentrated. Votsi and Roussoum Yalos bay both lie to the north of the port. Modern Patitiri village used to be a port servicing the old mountain village of Alonissos (Old Village). In 1965, a destructive earthquake forced all inhabitants of the Old Village to leave their homes and move to the port of Patitiri. The new village was named after the winepresses (patitiria) that locals used in the wine-making process.

From the port of Patitiri, day boating tours set off daily to many local beaches, as well as the neighbouring islands of the Marine Park where public access is allowed (Zone A).

In the north-eastern part of Alonissos lies the small natural port of Steni Vala. Serving as a refuge for fishing boats and crafts, Steni Vala is a lovely resort where visitors can find excellent quarters at apartments or rooms to let and enjoy good food at local taverns. The Rescue and Rehabilitation Centre for wounded and orphaned baby seals, run by MOm, is also found in this part of the island.

Peristera is an uninhabited island spread with macchia vegetation. Underwater archaeological research has brought to light an old shipwreck along with a series of other archaeological finds revealing that Sporades Islands had always been an important sea route for ancient cultures. Therefore, one of the primary goals set by the National Marine Park consists in preserving these archaeological finds and making them known to the world in cooperation with local authorities.

In the northern part of the Marine Park, the first island to come across is Kira-Panagia. Mountainous and uninhabited, this island has a smooth surface and is spread with macchia vegetation, pistacias (Pistacia lentiscus) and kermes oaks (Quercus coccifera).

Two shallow bays, Agios Petros and Planitis, are found in the southern and northern part of the island to provide a natural safe refuge for boats and crafts. In the eastern part of the island, there is a Monastery dedicated to the birth of Virgin Mary. Recently reconstructed, this monastery dates back to the meta-Byzantine period.

Heading northeast, Gioura is the next uninhabited isle to come across within the Marine Park. Gioura is a rocky and precipitous island giving shelter to many indigenous wildlife species. More specifically, a rare goat species - largely considered as indigenous - lives on this island. A popular destination on the island is the Cyclops’s cave with beautiful stalagmite and stalactite structures. Gioura and its caves provide a living place to the Mediterranean monk seal and therefore, the island has been declared a nature reserve.

Psathoura is the most northerly island of the Marine Park. In sharp contrast to the rest of the islands, its landscape is dominated by volcanic features, spread with heathers and other bushes. Plant species unknown to the rest of Marine Park islands are common here, such as the sea daffodil (Pancratium maritunum). In the southern part of the isle, Mandraki beach stands out within the dark rocky landscape for its fine white sand. Walking to the northern part, you can’t miss the large lighthouse built by French engineers in the previous century, signalling the international sea routes of the Northern Aegean Sea.

Piperi Island is the heart of the Marine Park and therefore, a strictly protected area. It is the most important nature reserve of the Mediterranean monk seal and many raptors that live and reproduce on its steep cliffs. Rare plant species, pine forests, kermes oaks, phrygana, pistacias and plants growing on cliffs are common here. There are up to 33 bird species and approximately 350 to 400 pairs of Eleonora’s falcons (Falco eleonorae).

Skantzoura is a hilly island with white marble cliffs going deep under the sea. It used to be the monastic centre of the wider region. It is spread with Macchia vegetation, phrygana and short cedars (Juniperus sp.). Along with Strogilo and Polemica (its two neighbouring isles), Skantzoura is an important nature reserve of seagulls (Larus audouinii) and Eleonora’s falcons (Falco eleonorae). 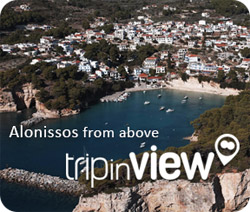